Born in Taipei, Chun-Chi Wang currently lives in Berlin where she works as an independent curator of art and an editor. She received her postgraduate qualification from the Tisch School of the Arts, New York University, having taken her degree at the Pratt institute (USA). From 2005 5º 2010 she worked as a lecturer at the Chinese Culture University (Taiwan). In 2011 she organised artistic activities in collaboration with the SYNAPSE international curators network in the Haus der Kulturen der Welt (Culture House of the World) in Berlin. In 2012 she worked as assistant to the German curator Anselm Franke in the Taipei Biennial Modern Monsters / Death and Life of Fiction. Under the Shih Chien University (Taiwan) international exchange plan she established the IDOLONSTUDIO – Network of European and Asian artists – in Berlin and organised a series of exhibition activities with large institutions around the world. In September 2014 she established the IDOLONLAB – European and Asian Art Laboratory – in Taipei with the objective of establishing dialogue among artists on the international scene.

Over the years Wang has curated numerous contemporary art shows in Berlin, New York and Taipei, among other places, with the aim of promoting the art of Taiwan abroad. Her main research interest is the public sphere and art, specifically “The creative relationship of art intervention in the public sphere”. With the aim of studying the sociocultural value of art, she interview academic, artists and curators. Among the exhibitions that he has curated are the following: No One River Flows (Kuandu Museum of Fine Arts (Taiwan), 2013), Urban Synesthesia (Kaohsiung Museum of Fine Arts (Taiwan), 2015), Hieroglyphic Memory: Surveying Bangka Through Narrative Trace (Bopiliao Historic Block Taipei, 2016), Crisis of Now: Contemporary Asian Photograph (Berlin, 2018; Nueva Orleans, 2019; Barcelona, 2020), Installation and Performance (Weimar E-Werk, 2019; Bauhaus-Museum, 2020; Goethepark Weimar, 2021). One of the field-study projects that she has organised abroad is the Off-Site Project, which she has taken to Latin America (Colombia, 2017; Peru, 2018; Argentina, 2019) and Eastern Asia (Turkey, 2017; Lebanon, 2021).

First of all, please briefly describe your project with Homesession. Did the idea arise during the residency or did you go with a project or pre-project in mind?
My impression of Barcelona is that it is a lively city under a radiant sun. During my residency with Homesession I worked with student from the Faculty of Fine Art of the University of Barcelona. I wanted to try to get them to express their emotions openly. As we went ahead with the workshop a couple of unexpected situations emerged. The project that we planned was called Ciutat Vella, and through it we wanted to explore the use of public space and initiate dialogue on life in the community, culture and history, with special emphasis on the Pakistani population which has become a permanent group of residents in this neighbourhood of Barcelona (The main neighbourhood is the Raval – an Arabic terms designating the suburbs) which is located in Ciutat Vella next to the Rambla. Synonymous with drugs and prostitution for many years, it is also still today known as the Barrio Chino, although these days it is mainly populated by Pakistanis, resulting in yet another name: Ravalstan).

In the specific context of your residency with Homesession, how far did the context influence the way you carried out the project?
In 1969, Heidegger wrote in Art and Space that art has the power of embodying places. A successful artistic place is one where people can meet and talk. For all its good location and facilities this space is neither a meeting point nor somewhere where interesting things happen. During my stay with Homesession my plan was to invite art professionals to create a performance in which there would be direct dialogue with the public (the residents of the area). 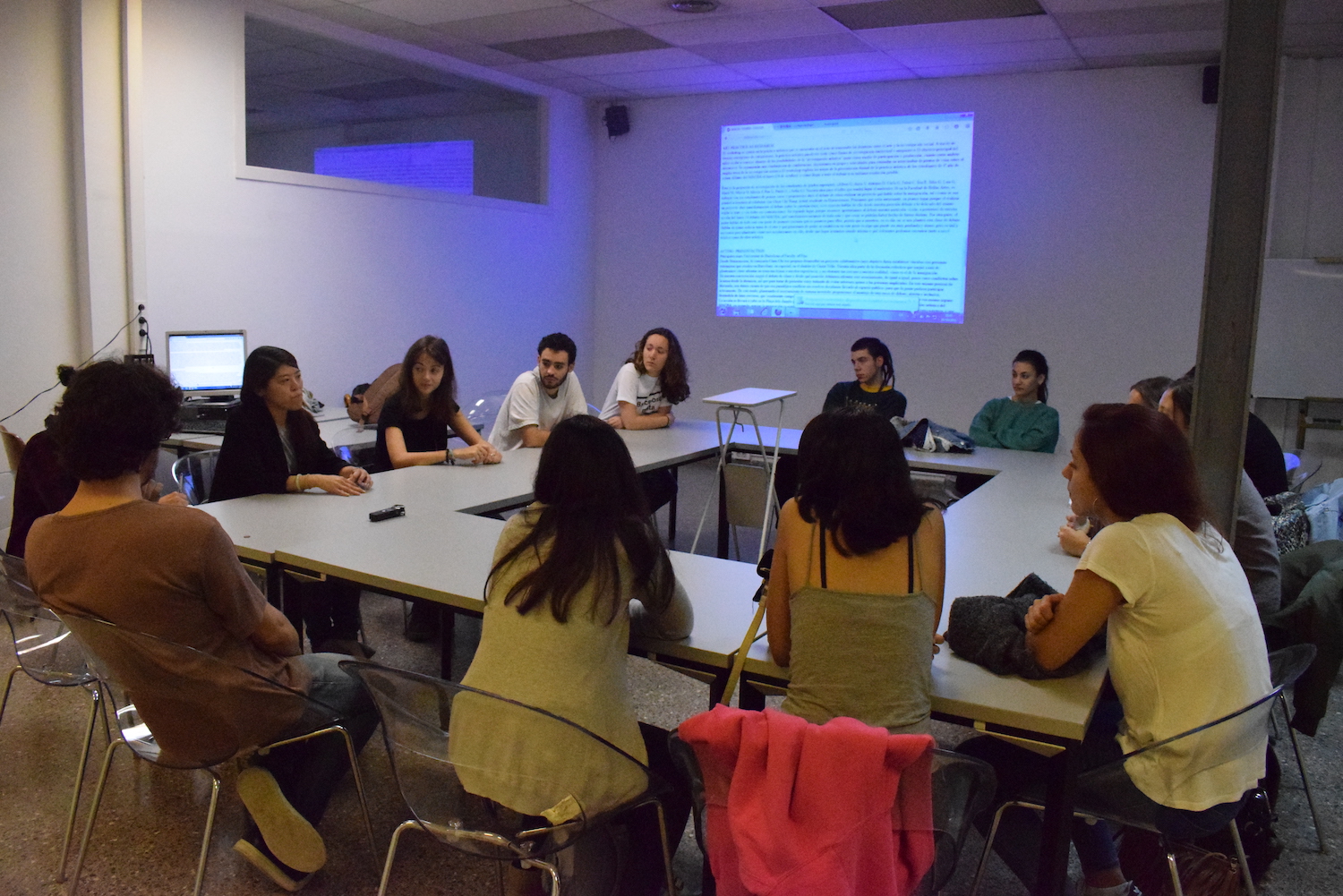 In depth research/trying out/a break: Which of these applies best to describe your residency and why?
Taking advantage of my stay I decided to research the historical memory, culture and daily life of Barcelona to become more involved with its residents. Of particular interest to me are the roles that established when you arrive at a place and interact with the local community.
The Faculty of Fine Art of the University of Barcelona invited me to organise a workshop for first year undergraduate students, which was later extended to fourth years. I proposed that the participants in the workshop (the students) should work on the creative process in collaboration with the neighbourhood residents as interpreters of art and culture. From an artistic pedagogy i wanted to offer the young students the opportunity to write down and express their opinions about the community and the environment as the artists that they are.

The main theme of the workshop is the action of establishing a dialogue about community life, culture and history. the students could invite residents of the area to participate in the creative process to establish a platform for debate where the opinions of each one could be challenged. This intersection of perspectives and the collaborative process encourages a new way of seeing their environment on both sides. The dialogue, the changes and the mutual influences involved, as well as the final result, form part of this collective work.

Specifically, has there been continuity in the line of research or the project you showed with Homesession?
On this occasion the main point of interest is community participation, with the hope that through the model of artistic planning some of the community problems and other questions of conflict can be resolved. This process requires the participation of the public and that they form part of the work. On exhibiting the work, art becomes part of the community: socially committed art in practice, what we call new public art. This comprises a redefinition of the public: the public space can be transformed for the artistic intervention, whether physically or symbolically. Public art goes from being a silent installation to a scenario where deeds and movements can take place. Here the key is in the creation of art in the context of culture, so we can consider this practice as an artistic form of social intervention. Finally, in the presentation of the project carried our during my stay, three teams were invited to display their work: the students from the Faculty of Fine Art of the University of Barcelona, the Roue Libre Project from France and the artistic group Bösediva, from Berlin.

“A new public art that transforms the public space, whether physically or symbolically.”

This project, which is both a movement and a transnational collaboration aims to bring together artists from different cultures so that together they can think up and create a new topography, while also reflecting on the idea of construction in the country and the possibility of achieving a fair economy, starting out from daily life, the discourse and model of different assemblies, self-organisation and other groups.

This project, which is both a movement and a transnational collaboration aims to bring together artists from different cultures so that together they can think up and create a new topography, while also reflecting on the idea of construction in the country and the possibility of achieving a fair economy, starting out from daily life, the discourse and model of different assemblies, self-organisation and other groups.

Mainly invited are contemporary Taiwanese artists so that , together with the curator they can spend time together, discuss and comments on the issues, and within that process they can explore new paths for thought in terms of the research topic. Perhaps significant changes will emerge in the focus of the investigation or some results will be generated, or we may be led to ask even more questions.

Do you think that this residency had an impact, with directly or indirectly, on you artistic career and in what measure?
Homesession is currently one of the few artistic-cultural spaces in Barcelona to take on exhibition proposals and promote artistic creation which also encourages artists to work together in interdisciplinary experimentation. In my opinion it is difficult to break through professionally in the art world. And it is not easy to find opportunities for collaboration; however, outside Taiwan it is common to see artists working in teams and influencing each other.