Born in Taipei, Shu-Jung Chao moved to France in 2005 to study at the École Nationale Supérieure d’Art de Bourges where she obtained a postgraduate qualification in Art (DNSEP). From 2011 to 2012 she continued her postgraduate studies at the Higher national School for the Decorative Arts. Her work covers new media, multimedia and transmedia art, etc. As well as having exhibited at well-known video art festivals and exhibitions, both nationally and internationally, she is the only Taiwanese woman artist to have had her work selected three times (2014, 2013 and 2011) for the content of ARTE, a Franco-German television channel. Later, her work has also been exhibited in the Cinémathèque in Toulouse, and in Paris at the Gaîté-Lyrique, as well as the Palais de Tokyo. In 2017, documentation about her solo exhibition was broadcast on Japanese TV channels NHK and RSK. As well as being selected in 2011 in the Made in Taiwan – Young Artist Discovery competition (organised by the Ministry for Culture in Taiwan) she has also been selected several times to form part of the Young Artists Collection of the National Museum for Fine Arts of Taiwan and the Taiwan Art Bank, another initiative of the Ministry for Culture in Taiwan. In recent years, her work has revolved around themes of disassociation and the journey: in the private setting this is a journey through memory and in the public ambit it is a question of globalisation. Currently she is fully dedicated to artistic activity.

First of all, please briefly describe your project with Homesession. Did the idea arise during the residency or did you go with a project or pre-project in mind?
Barcelona is a warm and lively European city with a rich historical and cultural heritage. Numerous buildings, both old and new, which are known throughout the world as well as the Mediterranean climate make this an attractive place for many international people to live. The cultural diversity in this city is of great interest to me. I have been able to continue with my research through my artistic project into topics that have concerned me for years: women artists, disassociation, situations, displacements, the search for utopia, the global village and climate change. In the private setting this is a journey through memory and in the public ambit it is a question of globalisation. I am also concerned with the recognition of local identity and the psychological and spiritual sensations that arise when living between different worlds (places and non-places) and living alongside different cultures. I began to look into the symbols and languages of this multicultural city, recording them together with local sounds in different languages (Spanish, Catalan, Italian, French, Urdu, etc.).

“I began to look into the symbols and languages of this multicultural city, recording them together with local sounds in different languages (Spanish, Catalan, Italian, French, Urdu, etc.).”

In the specific context of your residency with Homesession, how far did the context influence the way you carried out the project?
Sound has been an important catalysing component during my residency! For me Barcelona is a city of sound! Taking into account the close historical relation of Barcelona with the sea, I recorded different wounds of the sea, rain and water, as well as others which represent the city and its culture (of languages). Barcelona’s architecture has inspired me greatly! Questions such as how to install a contemporary or new media art work in a historical monument or an old building (like la Capella and the three galleries located in L’Hospitalet de Llobregat: Ana Mas Projects, etHALL y Nogueras-Blanchard), or a space as unforgettably surprising as Els Encants Vells (officially known as the Fira de Bellcaire) which I saw while I was looking for material to work with in the market.

The interaction between work and space: this is something that the contemporary artists should take well into account. With the added factor that the Homesession space is particularly high, I decided to make a new media work which could adapt to it alongside a multimedia installation.

In depth research/trying out/a break: Which of these applies best to describe your residency and why?
I have been really during the whole stay! Even though they were just two months, counting up I visited fifty art organisations. With the exception of the first few days when I was adapting to my new environment. Every day was like a rollercoaster, spending time researching and finding out about the artistic community in Barcelona, looking for activities that would be worth visiting and at the same time thinking about my own work. With no time to lose I went around absorbing new knowledge like a sponge and experiencing different cultural attitudes. Luckily my trip coincided with the Venice Biennial 2019 in Italy and the Lyon Biennial in France, so I could take advantage to visit them and get up to date on new European exhibitions. 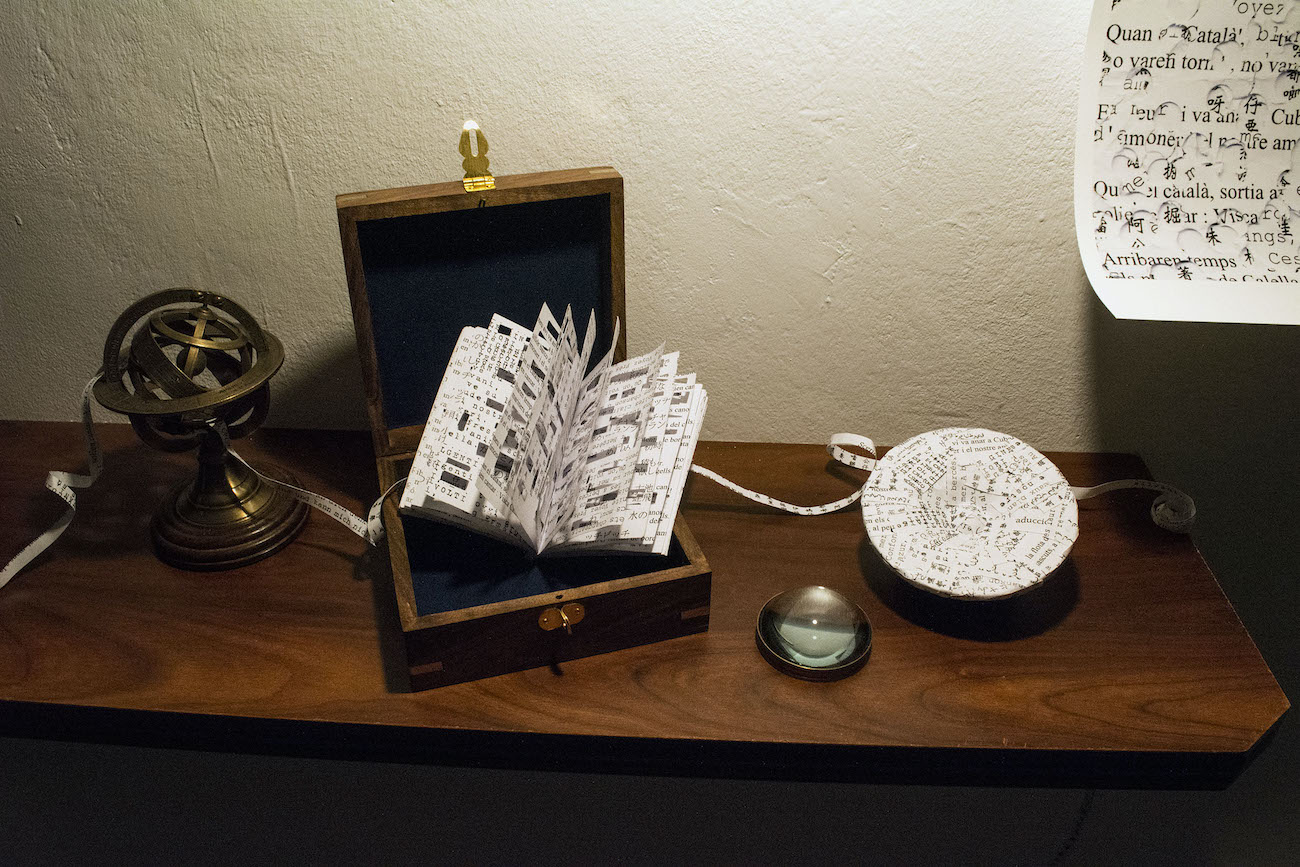 Specifically, has there been continuity in the line of research or the project you showed with Homesession?
As part of the creation of my work, during my period with Homesession I interviewed some foreign people living in Barcelona. Since I had studied in France for seven years from 2005 to 2012 I have a special love for Europe! Apart from the multiculturality i am also fascinated by the seriousness of study and the value given to professionalism. All of this has opened my eyes. This research work has not only enriched the work i was making but has also contributed with some valuable archives to the “Shu-Jung sound data-base”! These meetings have meant I could see the concept of nostalgia through other eyes and they have had a strong impact on the focus of my artistic work, as well as my own lifeview, study and artistic work.

How important is it to you to show your work in another country?
I try to go on one or two artists residencies each year, many of them in Taiwan but others in the US, Singapore, Japan, Europe, etc. Some are government-organised and others private. There are all kinds of modalities: some offer stays of just a few days and others up to one year, but all of them offer an unforgettable experience. I love to travel and each time I go to a new residency it is like a new journey, with all the emotions that can awaken and it is all food that nurtures my artistic work. I would like to mention the following two experiences:
1. Sculpting in Time, 2013. I made this series during my time in a forest on the outskirts of Boston. For the first time I decided to create a work in a forest and make a large-scale installation in the open air. Researching how Tarkovsky captures the image of and gives form to memory, I realised that light, time, gestation and hope are essential components in the creative process- I tried to mix the immense emotions of the interior world with the vast landscape of the exterior, thus exploring the relationship between humans and the landscape.
2. Islands! Islands!, 2015 and Taiwan Venus, 2015-2020. I made these two series during my time in Pulau Ubin, Singapore – another unforgettable experience! It was like a journey of survival on a desert island! Numbed by life in the big city, my emotions were gradually awoken! So I accepted the challenge of incorporating elements of nature in my work, something that continues to reverberate in my projects.

Do you think that this residency had an impact, with directly or indirectly, on you artistic career and in what measure?
Even though it was only two months, this experience is a milestone in my artistic career! Apart from bringing me to the city of Barcelona it has also offered me the opportunity to bring myself up to date with all the news in European art, both in terms of the exhibitions and the subjects dealt with by the artists. it has caused me to reflect on my own creativity and my own concerns. For me the creative process is not just a way of questioning things but it can also be the answer to those questions. Instead of being tied down by hegemonic logic we should be constantly digging under the surface of the unknown. During the process I met many prominent artists and curators. The series I made during my residency, Trans-, was immediately acquired by collectors and galleries. This was a great encouragement for me, and it reaffirmed for me the interest in my topics of research and gave me the confidence to continue with my line of thought.